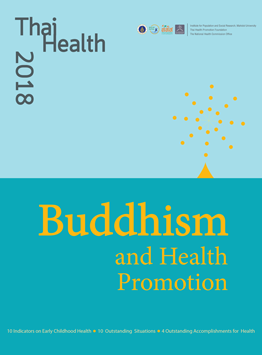 It is projected that Thailand will become a complete aged society in the year 2021, at which time the proportion of the population age 60 years or older will reach 20% of the total. As Thai fertility has fallen below replacement level, the proportion of the working age population has declined apace. Thus, it is imperative that Thailand build human capacity at all levels of the population. Childhood is the period of life that is marked by the most rapid development of the body, mind, intellect, and knowledge. Adequate care and quality development during childhood establishes the foundation for a secure future life, for the individual and for society at-large. This document on Thai health is divided into 10 Indicators on Early Childhood Health. The purpose of this document is to display the status, data and statistics in order to judge the success and remaining challenges for Thailand in promoting health and quality of life for the youngest generation as investment in the future of society.

The ten health milestones featured in this report echo the same ten highlights presented in the 2017 edition, and are as follows: (1) The Chakri King Journeys to Heavenly Abode, Instills Forever in our Hearts; (2) Run to raise funds: Betong to Mae Sai; (3) Reform of the National Health Security Act and the Thai Health Promotion Fund Act: Assessment of the Constitutional Impact; (4) The 2017 Infant and Young Child Food Marketing Control Act A Preliminary victory for Thai mothers and children; (5) 2017 Tobacco Products Control Act Another step forward for Thai health; (6) The Thai Welfare Card: Is it Really Inclusive Growth; (7) Development of Traditional Thai Medicine and Natural Healing Methods; (8) EEC: Don’t Neglect the Grassroots Economy; (9) The Poisonous Case of the Rice-pledging Scheme:Revisiting Government Corruption; and (10) NCPO Reform of the Country: Will this Overlook the Dream? The four health achievements for the Thai population include the following: (1) UNESCO Honours His Majesty King Rama IX ; (2) WHO Praises the National Health Security System of Thailand for Covering Home-based Kidney Dialysis; (3) Praise for Thai Leadership in Addressing Non-communicable Disease; and (4) Thailand Health Promotion Fund (THPF): Receives the award for the “No Tobacco Day” as a Good Governance Honour.

The special theme in this year’s report is a focus on the role of Buddhist principles and teaching in promoting a healthier population in the context of a rapidly changing society. The evolution of society is changing norms and lifestyles, especially among the younger generation. Thus, the question posed in this report is as follows: “Does Buddhism still have a role to play in today’s society?” This report also explores the potential links between Buddhism and health status. A profound understanding of this linkage requires a review of how Buddhism became an integral part of Thai society. This report also reviews the connection between the core principles and discipline of Buddhism, i.e., the Dharma, as a guideline for comprehensive healthy living, with a focus on the dimension of the mind as a basis for physical, intellectual and social contentment. These principles should help everyone see reality of the situation as it relates to natural law, and conduct their lives accordingly, with awareness, regardless of their circumstances, nutrition, and behavior, etc. This text explores how strategies of Buddhist thought can create a social consciousness, and the role of the Sangha and monasteries in health promotion. This integration can occur in such common events as Buddhist novice ordinations, the role of the Wat (i.e., Buddhist monastery) in the community, and role of the Buddhist adherents themselves. Finally, this volume concludes that Buddhism is a promising avenue to build the health of the population, in one way or another, at one level or another, depending on the direction this national community of Buddhists wants to go.