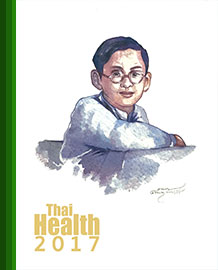 At the end of the Millennium Development Goals (MDGs) Sustainable Development Goals (SDGs) began to be adopted as an important and guiding concept under the leadership of the United Nations. The report on Thai Health would like to take this opportunity to use the SDG as the unit of measurement and specifically for Goal 3: Ensure healthy lives and promote wellbeing for all at all ages. We intend to do this by presenting 11 indicators under the title of: The Health of Thais and the Goal of Sustainable Development. We will present data that reflect various levels of challenges in order for Thailand to achieve the sustainable development goals. This will be a very challenging task seen in the rate of mother’s mortality that remains high in certain areas of the country, non-communicable chronic diseases that have caused unnecessary deaths, accidents that still remain one of the highest in the region, the Universal Health Care Scheme which still encounters obstacles to providing equal and quality access to its services. In addition there is also drug addiction and the environment that remain as continuing challenges.

ส่The second part of this report will look at 10 important or prominent health issues that have occurred during the year one of those of which is the holding of a referendum for Thailand’s 20 year strategy that was passed allowing this Health Act to be passed into law. The birth of the 2nd Health Charter including a new HIA: Towards the Health of Thai’s. A draft Act was also undertaken to protect people who received health services from the state, the registration of low income persons, measures to assist the elderly in preparation for an ageing population, bringing in foreign labor, an MoU on the special economic development zones and the challenge of low prices for rice. Four successful outputs in this year include the provision of the Gold Health Care card for all disabled persons, free education for children from nursery level to grade 6, Thailand reported as being the country that has the lowest level of need (poverty) and efforts to use the Gold Card universal health care scheme as a model for other Asian countries.

In every society there exists differences and variation and even in small groups such as the family, its members are all different from one another. What is of importance though is how a society enables people of different nature and background to live harmoniously together without conflict or neglect that may result in a fragile or weakening of this part of society. A special section of this report on Thai Health 2017 invites you to reflect on the issue “Empowering Vulnerable Populations: Creating an Inclusive Society”, that will allow the reader to better understand the dimensions of fragility, the reasons that make persons become fragile and the characteristics of fragility of each group including the impact that fragility has upon these groups as well as what can be done about it so that persons in these groups can escape from this predicament and become fully fledged members of society with dignity, equal to others and with equal opportunity and access to resources in the community.